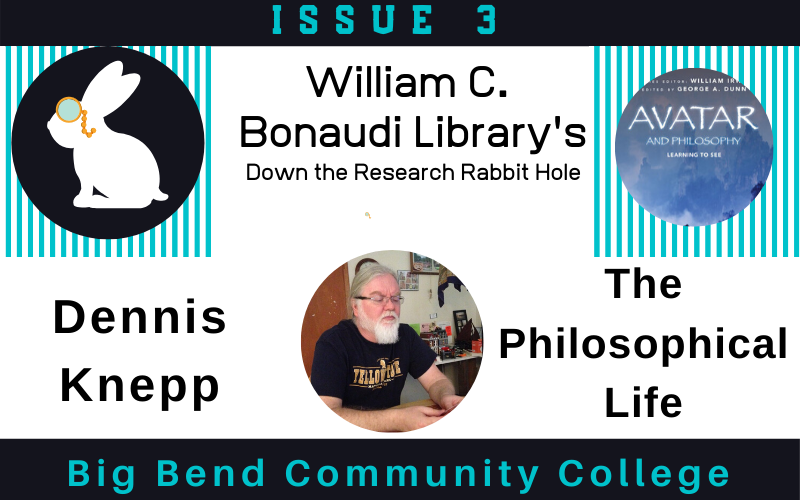 Is there a book, a movie, or something in particular that drove you to your studies in Philosophy & Religion?

The Fabric of the Heavens: The Development of Astronomy and Dynamics by Stephen Toulmin and June Goodfield (Harper & Row, 1965) was the first assigned college text that I absolutely devoured and was excited to discuss in class. I was an engineering student in my hometown Wichita State University and taking philosophy courses on the side because I was an atheist in a town full of Baptists and I enjoyed reading Nietzsche’s critiques of religion and finding Christianity’s origins in Plato. Ben Rogers’ course “Science and the Modern World” introduced me to the history and philosophy of science which showed me that my knowledge of math and physics could be connected to my interest in historical philosophers.

What's your approach to research?  Do you go in with a plan or are you random?

I use it as an excuse to go to experts. When I wanted to write about Aristotle’s theory of catharsis, I found a recent collection Essays on Aristotle’s Poetics by Amélie Rorty and the essays about catharsis were all discussing Martha Nussbaum’s theory. That gave me a good excuse to finally read her famous book The Fragility of Goodness: Luck and Ethics in Greek Tragedy and Philosophy. Sometimes it’s a good excuse to talk to someone I know about something they know a lot about. When I wanted to know more about the variations of Superman or the Greek mythology in Wonder Woman, I talked to Eric Van Woert at Olde World Trading Company in downtown Moses Lake where we spent hours looking at old comics. Cara Stoddard, a former BBCC English Instructor, encouraged me to read more Slavoj Žižek. Thinking about the travels of Bilbo Baggins gave me the excuse I needed to read Cosmopolitanism by Kwame Anthony Appiah.

Do you have a set of "go to" journals, authors, blogs, databases, or websites you use to keep up to date in your field?  And also - as your field is inherently cross-disciplinary - anything else you use to keep intellectually tuned up?

My dissertation was on Charles Sanders Peirce and so for many years, I subscribed to The Transactions of the Charles S. Peirce Society. I achieved a life-goal by presenting an essay at The Charles S. Peirce International Centennial Congress in 2014 at the University of Massachusetts Lowell.

I try to regularly attend local philosophy conferences such as PLATO-WA and the Northwest Philosophy Conference. I have a huge backlog of philosophy books that are waiting for me to read including a new translation of the Bhagavad Gita. And I’m always on the lookout for online resources for my students such as this YouTube cartoon presentation of The Trolley Problem narrated by Harry Shearer.

You’ve caught me at a funny time in my life because I’ve put my research projects on hold. I’ve got about three or four essay ideas in my head but I’m waiting until I can take a sabbatical to pursue them. Instead, I’m using my brain to be a Dungeon Master to play Dungeons & Dragons. I’m more likely nowadays to be reading Mordenkainen's Tome of Foes to research the Blood War between the chaotic evil demons from the infinite Abyss and the lawful evil devils of the Nine Hells. Writing is such a private occupation while DMing is a way that I can obsessively research and use it to play a game with others.

You recently hosted a philosophy conference in Moses Lake.  What were some of the hot topics covered? Also, which topics were most robustly - and maybe most loudly - discussed?

PLATO-WA is the Philosophy and Logic Associated Teachers of Washington. We are a group of philosophy instructors at community colleges in our state. Basically, this is my peer group. My friend Paul Herrick organized us in a successful effort to keep the SQR status of PHIL&120 Symbolic Logic. We’ve kept it going as a place to discuss teaching philosophy and logic in community colleges. Paul likes it when we meet east of the mountains and so I hosted the 2020 event.

All of our presentations were about how to explain difficult philosophical ideas to introductory students in freshman-level courses. There were presentations on the Socratic Method and on using open educational sources, but there was also an emphasis this year on non-Western ideas with presentations on Brahma in Hinduism and how to lead a discussion on Taoism given that the Tao that can be spoken is not the true Tao.

However, I like to think that my presentation caused the most discussion. I spoke about teaching Marshall McLuhan’s The Medium is the Massage and I shared about ninety examples of memes that my students had submitted on a variety of philosophical topics.

“A Phenomenology of Christmas,” a five-part series, Columbia Basin Herald, December 2004. Each essay was an examination of Christmas through one of the five senses.

“Bella’s Vampire Semiotics” in Twilight and Philosophy: Vampires, Vegetarians, and the Pursuit of Immortality, John Wiley &
Sons, Inc., 2009. I use Bella’s discovery that Edward is a vampire to introduce the triadic semiotics of Charles Sanders
Peirce.

“Why We Enjoy Reading about Men Who Hate Women: Aristotle’s Cathartic Appeal,” in The Girl with the Dragon Tattoo and
Philosophy: Everything is Fire, John Wiley & Sons, Inc., 2012. I use Martha Nussbaum’s interpretation of Aristotle’s
theory of catharsis to understand why we enjoying reading violent stories about abused people rather than stories of
nice people doing nice things.

“Bilbo Baggins: the Cosmopolitan Hobbit,” in The Hobbit and Philosophy: For When You’ve Lost Your Dwarves, Your Wizard,
and Your Way, John Wiley & Sons, Inc., 2012. I use Biblo’s appreciation of other cultures outside the Shire to introduce
Kwame Anthony Appiah’s theory of cosmopolitanism.

“Gods, Drugs and Ghosts: Finding Dionysius and Apollo in Black Sabbath and the Birth of Heavy Metal,” in Black Sabbath and
Philosophy: Mastering Reality, John Wiley & Sons, Inc., 2013. Series editor William Irwin requested that I write about
drugs and Black Sabbath and so I used it to introduce Nietzsche’s analysis of Apollo and Dionysius in the birth of
ancient theater. This is my most experimental published writing.

“Superman Family Resemblance,” in Superman and Philosophy: What Would the Man of Steel Do?, John Wiley & Sons, Inc.,
2013. I use the different variations of Superman to introduce Wittgenstein’s concept of a family resemblance.

“’We have an indigenous population of humanoids called the Na’vi’: Native American philosophy in Avatar,” in Avatar and
Philosophy: Learning to See, John Wiley & Sons, Inc., 2014. I use the Na’vi to introduce contemporary Native
Americans philosophers and Scott Pratt’s Native Pragmatism.

“Simplicity is the Ultimate Sophistication,” in Steve Jobs and Philosophy: For Those Who Think Different, Carus Publishing
Company, 2015. I use Steve Jobs’ theory of design aesthetics to introduce Slavoj Žižek’s interpretation of the Hegelian
dialectic.

“The Mind of Blue Snaggletooth: The Intentional Stance, Vintage Star Wars Action Figures, and the Origins of Religion,” in The
Ultimate Star Wars and Philosophy: You Must Unlearn What You Have Learned, John Wiley & Sons, Inc., 2016. I use
playing with action figures as an introduction to Daniel Dennett’s philosophy of mind and his speculations about the
origins of religion.

“Merciful Minerva in a Modern Metropolis,” in Wonder Woman and Philosophy: The Amazonian Mystique, John Wiley & Sons,
Inc., 2017. I use the Greek mythology found in Wonder Woman to introduce Hegel’s philosophy of history. This
became the basis for a public lecture at the Salon Series at the Moses Lake Museum and Art Center.