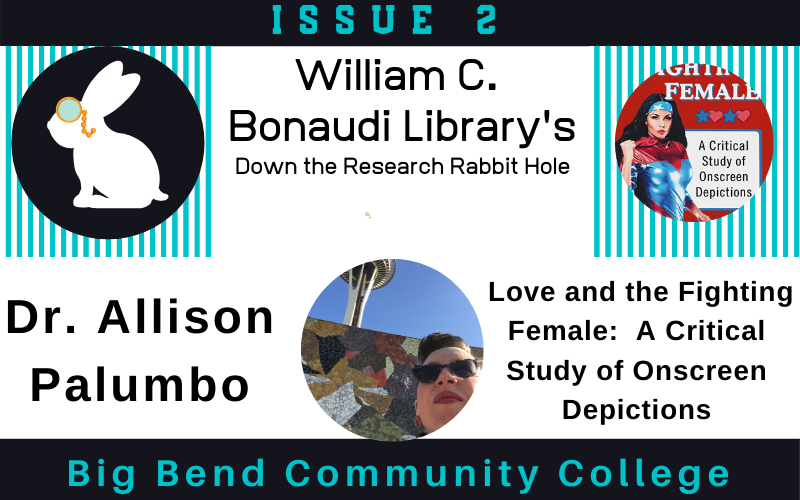 Tell us about your new book that is coming out.  When did you first become fascinated heroines in mass media?

It’s my first book, and I am very excited and a little nervous to be putting my ideas out into the world.

When I first began to understand the idea of a hero, I was a child of the 70s and early 80s, and I didn’t really differentiate between male and female heroes. I just loved heroism and all the heroes on film and television at the time (particularly Wonder Woman and Superman and Luke Skywalker). It wasn’t until I started to get older and notice a distinct difference in how male-bodied and female-bodied heroes were portrayed and that there was a pattern. The male was always stronger, always the one to do the final rescue, and let’s face it, there were at least 20 or more male heroes to every 1 female, especially back then. The female-bodied hero almost always had to be saved, still, and she had to wear ridiculous clothes that were not appropriate for a fighter (still a problem), which made me dissatisfied.

So, I started trying to find exceptions to what seemed like an unspoken rule that heroic women onscreen couldn’t be as badass as heroic men. It was something of an obsession, and that stayed with me over the years. And I found them. And I noticed that more of them emerged in popular culture starting in the 1990s, and they have only increased since. And I began to notice that even though these fighting female characters (as I call them in the book) were doing things no one had seen women do onscreen, there were still many ways that their strength and independence were attenuated—always reduced in some way in the narrative. Particularly if there was a romance involved.

Why romance? Because at the same time I was seeing patterns of female heroes being restrained or limited in some way that male heroes weren’t, I was seeing story after story of women giving everything up for love, of changing themselves in some drastic way and, frankly, losing themselves. I wanted to explore the negative implications of both issues at the same time. So, an idea was born. And that idea led me to a paper I wrote when I was completing my Ph.D. coursework at the University of Kentucky, and that paper became the basis of my dissertation and then book.

What kind of research does it take to pull together a book?  What was the hardest resource to find? How did you manage your citations?

I was very fortunate that I was studying at a university with one of the best-endowed libraries in the country, so I never had trouble finding resources. Libraries matter! And how well-funded a library is has everything to do with how much it can provide students. Anyway, I had to read books and academic journal articles on so many topics: violent women, male and female heroes, gender and race ideologies, feminist theories on popular culture, film, and television, autonomy, romance. I basically had to become familiar with every credible source (and some not-so-credible) I could find that had anything to do with my topic, so I could be sure that my work 1) contributed new perspectives and information to what was already available and 2) speak to or relate my work to relevant work others were doing. The only resources I had to struggle a bit to find were recordings of some earlier TV shows from the 1950s, 60s, and 70s like Honey West and Get Christie Love and McMillan and Wife (and that show was TERRIBLE—so hard to watch, as was the 1990s TV version of La Femme Nikita…ugh, so many hours).

As for my citations, I used standard MLA documentation for my work, which is typical for my field, though I also used Endnotes, which aren’t as standard except in longer works. I made sure that I took really good notes as I read from the works I used, identifying when I would write quotes and paraphrases (what page it was from and the author). I had to be particularly careful because evidence of plagiarism in my book—even accidental plagiarism—would basically keep anyone from even reading my scholarship after that because I would have lost all credibility. But I am not worried because I took such careful notes.

What is your mental space when it comes to research?  Do you have a plan? Are you random?  Is it a research rabbit hole or a carefully planned expedition?

Great question! When I was an undergraduate, I always started with a plan, but the longest paper I wrote then was only 40 pages for my senior thesis. It’s a lot easier to envision an idea that size—I could wrap my head around the whole construct and build from there. I was very organized then—note cards and number systems and outlines.

As my studies continued and the ideas I engaged with and created became more complex, my carefully crafted plans for approaches were replaced by random rabbit holes. I would just pick a topic related to my general ideas and then start reading until I started to get a sense of that topic’s complexities and nuances, so then I could start to see if it related to my idea or if it helped me construct my idea more. Some reading just led me to more reading. I read a lot of work that I didn’t technically use in the book but that made me understand the field and disciplines I was engaging with enough that I could be conversant in them and fit with expectations. After I did that long enough and on enough topics, then I could start to think about what was missing, or what was wrong, or what had been overlooked in what others said, so I could figure out what I had to say, what my contribution could be.

As I often tell my ENG 101 students, crying is a big part of my research process now when I sit down to start the writing, mainly because my work at this point in my writing abilities has to be so well-developed and aware of what’s out there. I will often get overwhelmed at the beginning, worry about how on earth I can accomplish this project, fear that I will not have anything interesting or useful or intelligent to say, and then the tears. This is after hundreds and hundreds of pages of formal writing experience. This is after even reminding myself I’ve done it before and can do it again.

But as I also tell my students, once the crying ended, I had so many notes from my reading and watching that I didn’t have to stare at a blank page—I had already been writing for months! All I had to do was pick a note I had written and use that to answer the question “what does this have to do with anything?” In writing through that, to explain it to myself, it helped me start to see the shape of my idea form. If that note didn’t go anywhere, then I would pick another one and do it again, until I could focus on a thesis—my main point. Then, the shape would become more clear and the work a little more narrow.

Writing should always be a little hard for people because it means that they are challenging themselves with what they are saying. Just because I freak out, in the beginning, doesn’t mean I won’t finish it. I have accepted it will happen and that, when I’m ready, I will move on and be fine. Every new chapter, the process would start again, but I didn’t and I don’t fear the fear anymore, so to speak. It means I am going to do more and better because I care about succeeding.

So I now embrace the fear and also failure—my book is something like 350 pages, but I also have about as many pages of notes that I didn’t use, thoughts that I didn’t pursue, and I even at one point had half of a chapter written before I realized that it wasn’t where I wanted to go, so I stopped that train. But I kept it all in files with my drafts because one never knows where the next project will lead.

Much of your research involved film and video. How did you approach and manage this?

At one point, in my deepest research phase, I would read some books and articles for a few hours and then watch 6-8 hours of TV and films a day. I was the master binger. It might sound easy, but it was not. Trying to maintain close attention to anything that long is difficult, much less to be analyzing it at the same time. My process was similar to a process I show my ENG 102 students when we practice visual analysis using a Key and Peele sketch, “Substitute Teacher”—with lots of pauses and time for gathering ideas about moments, scenes, dialogue, settings, sounds, etc. So, in my research, I would watch a bit, pause, take notes, rewind, catch quotes, pause, rewind again. I had to be very careful because I can reread passages and a whole book more easily and quickly than I can watch 5 seasons of a broadcast show with 23 episodes. There was no time to watch them all again, so I had to get it right the first time and then go back for selective episodes or moments. (My spouse stopped watching the shows with me very early on because it was so annoying for him to have the story interrupted all the time.) I needed to make sure I had heard correctly and quoted correctly, again, so my work would be credible for the kind of skeptical audiences who read scholarship. It was mentally exhausting and also very sedentary, so I had to make sure to get off my butt every day for at least a walk to stay sane.